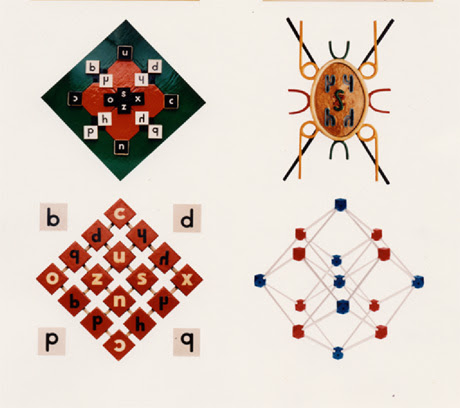 The following is much better:

It is interesting to observe that the human brain has been structured by nature through evolution in a progressively self organizing way to be generally attracted to symmetrical objects. Objects that contain the principles of symmetry operations like rotation and reflection. Dr. Shea Zellweger's work does have an art-like aesthetic appeal. However, there is more going on in his work than mere symmetry, geometry or art. His works are the manifestation of the most cognitively ergonomic and advanced system of logic notation to date. Semioticians, mathematicians, logicians, crystallographers, and to a degree physicists will appreciate his multi-dimensional geometrization of logic in an iconographic Peircian fashion. He has engineered his X-stem Logic Alphabet for logic notation by dimensionalizing Truth Tables and using a Cartesian Axis System that replaces xy axes with AB. Children of he future may very well be learning mathematics, logic and to a degree linguistics through this or a similar system that combines a multi-layer and multi-dimensional notation system that allows them to literally see and touch the relations between these seemingly disparate fields. Imagine being able to do logic and Boolean algebra through symmetry operations of reflection and rotation using an efficient read to write ratio notation that iconographically contains entire built-in truth tables. There are 16 iconographic letter-shapes in the photograph above representing each of the 16 logic connectives and their relationship to one another. The future of notation is beautiful and it is already here!

Enantiomorphic Chamber indexes an unrecognized iconographic phenomenon in contemporary art—reflected figures—and proposes a label for it, enantiomorph. Strictly speaking, an enantiomorph is a pair of asymmetrical figures, usually two three-dimensional forms, that are mirror images of one another. Our curatorial stance is looser than this. We take our name from a Robert Smithson sculpture, Enantiomorphic Chambers, 1964/65.